At doctors appointment physician shows to patient shape of prostate gland with focus on hand with organ. Scene explaining patient causes and localization of diseases of prostate, problems and signs

Prostate-specific membrane antigen (PSMA) is a transmembrane glutamate carboxypeptidase that is highly expressed on prostate cancer cells. Radioligand therapies such as lutetium-177 (177Lu)–PSMA-617 delivers beta-particle radiation selectively to PSMA-positive cells and the surrounding microenvironment, while sparing most normal tissues. This radioligand therapy has been associated with encouraging biochemical and radiographic response rates, reduced pain, and low toxicity in multiple studies involving patients with progression of metastatic castration-resistant prostate cancer (mCRPC) after standard therapy.

In this context, on September 16 the VISION trial (NCT03511664) was published in the New England Journal of Medicine, an international, open-label, phase 3 trial investigating the efficacy and safety of 177Lu-PSMA-617 plus protocol-permitted standard care in a specific population of previously treated patients with mCRPC who were selected for PSMA positivity on the basis of PSMA PET imaging.

Eligible patients had mCRPC previously treated with at least one androgen-receptor–pathway inhibitor and one or two taxane regimens. Moreover, the PSMA PET scans should be positive. Patients were randomly assigned in a 2:1 ratio to receive either 177Lu-PSMA-617 (7.4 GBq every 6 weeks for four to six cycles) plus protocol-permitted standard care or standard care alone. Protocol-permitted standard care excluded chemotherapy, immunotherapy, radium-223, and investigational drugs. The alternate primary end points were imaging-based progression-free survival and overall survival, which were powered for hazard ratios of 0.67 and 0.73, respectively. Key secondary end points were objective response, disease control, and time to symptomatic skeletal events.

A total of 831 men underwent randomization. The baseline characteristics of the patients were balanced between the groups. The median follow-up was 20.9 months. 177Lu-PSMA-617 plus standard care significantly prolonged, as compared with standard care, both imaging-based progression-free survival (median, 8.7 vs. 3.4 months; HR, 0.40; 99.2% CI, 0.29 to 0.57; P < 0.001) and overall survival (median, 15.3 vs. 11.3 months; HR, 0.62; 95% CI, 0.52 to 0.74; P < 0.001). Furthermore, the median time to the first symptomatic skeletal event or death was 11.5 months and 6.8 months in the 177Lu-PSMA-617 group and in the control group (HR, 0.50; 95% CI, 0.40 to 0.62; P < 0.001), respectively. Among the 248 men who had measurable target lesions according to RECISTv1.1, on independent central review at baseline, a complete response was noted in 9.2% and in none; a partial response was identified in 41.8% and in 3%, respectively. The proportions of patients with confirmed decreases in the PSA level of at least 50% and 80% from baseline were higher in the 177Lu-PSMA-617 group than in the control group. The incidence of adverse events of grade 3 or above was higher with 177Lu-PSMA-617 than without (52.7% vs. 38.0%), but quality of life was not adversely affected, as observed in the time to deterioration in the FACT-P total score and BPI-SF pain intensity score, which were also favored in the 177Lu-PSMA-617 group compared with the control group. The authors conclude that 177Lu-PSMA-617 prolonged imaging-based progression-free survival and overall survival when added to standard care in patients with advanced PSMA-positive mCRPC. Reference: 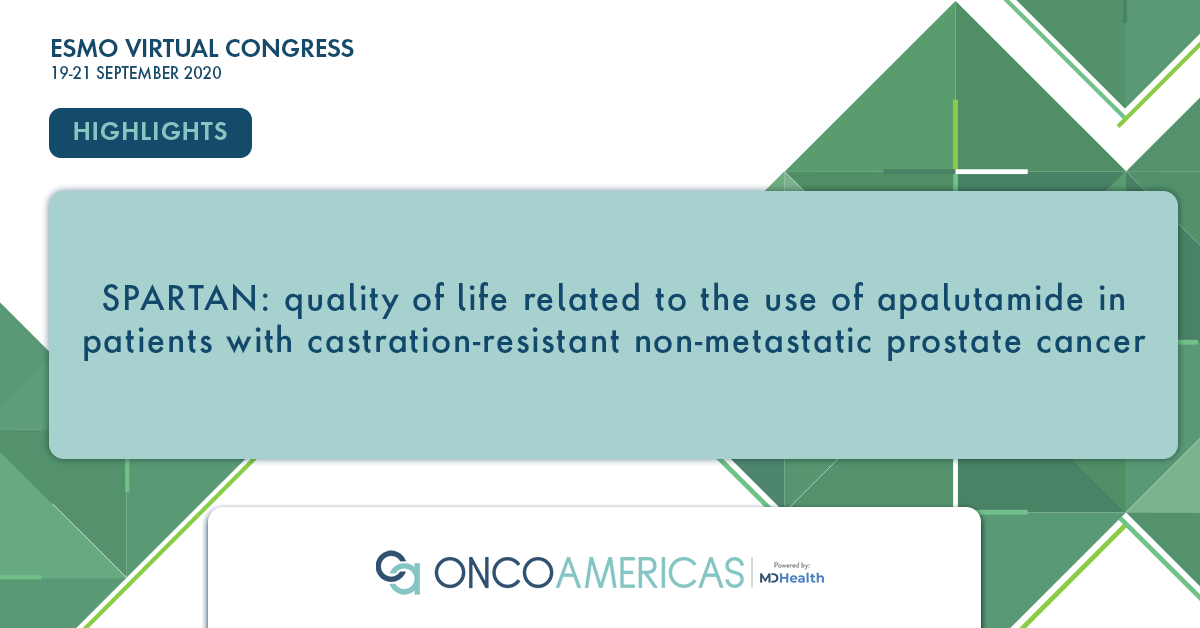 SPARTAN: quality of life related to the use of apalutamide in patients with castration-resistant non-metastatic prostate cancer